Lambert the Sheep Chef... A rhyming tale that will make Mother Earth smile

Lambert planted a garden. He watered and sowed.
He seeded and weeded and signs of life showed.

He waited and soon saw sprouts push through the soil.
Stalks stretched to the sun and vines creep and coil.

Lambert gazed upon colors; red, yellow, and green.
His food was so fresh, the sweetest he’d seen.

He admired the garden.  His heart filled with pride.
He had a green thumb that he could not hide!

"Sheep Chef Lambert" follows a determined gardener/chef Lambert and the challenges he faces as a rising star chef in his neighborhood.  How will he overcome the growing demand for his tasty creations? Bon Appetite! -A
Posted by AnneMarie at 10:01 PM No comments: 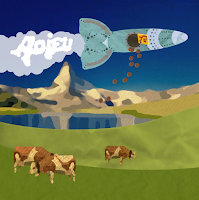 It is a sweet surprise to discover a new illustration from Adam in my inbox.  He is more than half-way finished with the artwork for "Goodbye to the Earth."  In this post I'm excited to share another of my favorite illustrations with blog readers.  Truth be told... they are all my favorites... which is totally not the definition of a favorite... AND even worse, I am unable to come up with a more creative response to his emails than "I love it" or "Wow!"... I am at a loss for words, but I guess that is what an illustrator hopes for... who needs words when the artwork fosters a speech-stealing sense of wonder? -A
Posted by AnneMarie at 9:34 PM No comments:

Email ThisBlogThis!Share to TwitterShare to FacebookShare to Pinterest
Labels: FYI

Illustrator Found! "Goodbye to the Earth" is rocketing toward self-publication... 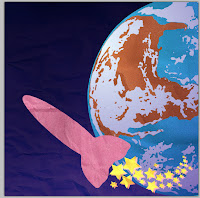 My brother is a pharmacist by day.. actually by night... he works what I would consider to be a brutal overnight shift... In addition to his aptitude for chemistry, he has always had an innate talent for art... He just sees things through a different lens... and I love it!  He has decided to help me out with my "illustrator for hire - without pay" problem!

So now, when he is not dispensing meds, he will be dreaming up illustrations for "Goodbye to the Earth"...  I can't wait to see what comes next!  Cyber Hugs, -A
Posted by AnneMarie at 12:18 PM No comments:

Email ThisBlogThis!Share to TwitterShare to FacebookShare to Pinterest
Labels: FYI

My Publishing Adventure... If I could Kayak with a Yak is available...

I am so excited... I can't hold it in... I created a real book out of my text for "If I could Kayak with a Yak" by using Lulu.com!  Please check it out before the clock strikes midnight, or I pinch myself, or my computer turns into a pumpkin...  I stretched my abilities with this one... I created the illustrations to try to express what was playing out behind my eyeballs as I wrote the story.  It was fun and frustrating; exhilarating and very humbling!

The book is available in soft cover... (spendy, I think) and e-book (much more palatable)... linked below is your path to, what I hope is, a read that will make you smile...

I also think you'll be able to find it in iTunes... still checking on that!

Happy, Happy Reading!  -A
Posted by AnneMarie at 11:27 PM No comments:

"Milton Pratt, the Duke of Scat" ... Feline fans fall at his feet 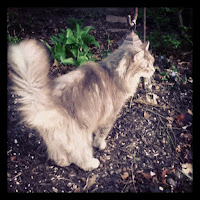 From "Milton Pratt, the Duke of Scat" (supplied by me, Anna Maria)

Come a little closer.  People gather ‘round.  Open up your ears and listen to the sound.

I know a jazzy tale sure to make you say “whoa!”  A-one and a-two and away we go!

In a skinny alley by a lone streetlight,  a twinkling orb, in the dark of the night,
That shines in the center of buildings so tall,  where alley cats roam and creep along the wall.

A man leans back upon the streetlight’s pole. He snaps his fingers to the rhythm in his soul.
He’s lost in his music, and the alley cats sway.  They sit by his side.  Never will they stray.

"Milton Pratt, the Duke of Scat" is another of my texts that uses a musical rhythm to add to the reader's experience. - This from the girl who can't dance... Milton has an odd ability that most folks don't appreciate; the feline demographic, however, does.  Milton stays true to his talents in this quirky, lyrical piece. ...skippity bop, see ya! -A
Posted by AnneMarie at 10:11 PM No comments:

Halfway Henry... (it is possible, prose?)

From "Halfway Henry" (courtesy of me, Anne Marie) 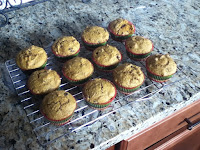 Henry wanted to do everything.  So Henry did everything halfway.

Each morning his alarm rang at half past six.  Henry put on half his school uniform because he did not like to wear his tie at breakfast.  Henry could never decide what to eat, so he ate half an apple and half an orange with his toast.  “Please spread half with peanut butter and half with jelly,” Henry told his mother.

While he slid on his tie; already half-tied, Henry brushed his teeth but only the top half because he was late.  He put half of his books in his bag and ran for the bus, already halfway down the block.   Henry sat with Tori on the bus, but just until it reached the bridge.   The bridge marked halfway to school, so he switched to sit with Josh after the bus crossed to the other side.

During quiet study hour, Henry spent half of his time on math.  When he worked through half of the problems, he decided to read half of his library book. The book was entertaining but Henry was nearly out of time, so he put it down to study his Spelling list.  This week’s list was compound words.  They were Henry’s favorite.  If you split the word in half, you ended up with two separate words like, bath and room or play and ground.

Have you ever fooled yourself into thinking you could do it all?  Have you attempted to be a super-multi-tasker, only to find that you dumped the dog food in the muffin batter, and baked the ipad?  Like the rest of us humans, Henry tries to take it all on.  He eventually comes to realize the gratitude that stems from fully immersing yourself in a task, and following it to its end... if he isn't a little yogi, I don't know who is... namaste -A
Posted by AnneMarie at 9:03 PM No comments:

Goodbye to the Earth... (this has serious App-eal folks)


Before I lift off, I will take one more trip, and circle the globe in my swift rocket ship.


Each country I pass shall wave their farewells.  But will I remember their sights and their smells?
I shout “Goodbye Earth!” I am bound for the sun.  The countdown begins. Five. Four. Three. Two. One!

In my location-rich manuscript, "Goodbye to the Earth," a child who has decided to leave the Earth for space, takes one final journey around the world.  He says farewell to each country in its native language while noting the unique sites that he will miss (Flamenco dancers in Spain... mysterious Loch Ness).   His travels take him in the correct order around the globe.  With extraordinary illustrations, animation and sound, I feel this book has real potential to succeed in the world of the ever-growing, ground-breaking apps.   Happy week-ending... -A
Posted by AnneMarie at 7:51 AM 1 comment:

AnneMarie
Daydreamer... admittedly, slightly perfectionistic, though generally a tranquil being...

In case you missed the first post, I am looking for a talented illustrator and a hard-working coder who will deem my work a perfect fit for their next e-book project. Cinderella team, please know the shoe fits!

My Other Blog Project

If you happen to be a foodie, own a blender, or have the intention of consuming more greens... please check out my other blog project... "Mixed Up and Smoothed Out." It is my personal blending resource and gift to whoever reads it...
"Clinking Glasses" - Cheers! -A

A Note to ease your mind

My works are copyrighted and many have been opined by a local publisher, with the recommendation for trade publication... In case you were loosing sleep... -A 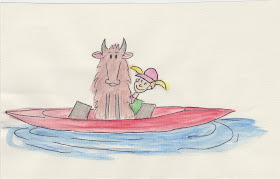 Not likely, but it served my purpose...

a (is for alligator) rendaci (at) yahoo (dot) com

Jack-ie of a few trades

In my work I build community relations plans for a construction company, construct and teach yoga classes on the side, and piece together potential children's picture book texts (in case you were curious) 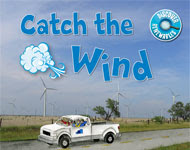